The Market Parkade is the first parking structure to be built in Guelph in 30 years. It will start to address the current shortage of available parking spaces in Guelph’s growing downtown and is one of the first steps to implementing the Parking Master Plan. 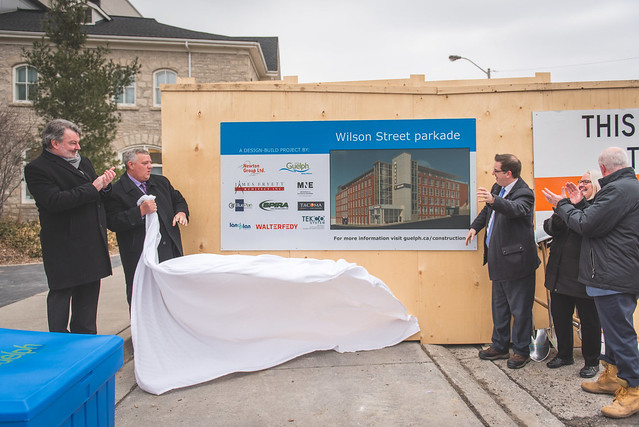 The Wilson Street parkade will start to address the current shortage of available parking spaces in Guelph’s growing downtown. This parkade is one of the first steps to implementing the Parking Master Plan.

It is anticipated that the whole project, including the Wilson Street parkade and on-street reconstruction, will be complete by the fall of 2019.

Council approved the design-build contract of $20.4 million for the design and construction of the Wilson Street parkade and related street work, including replacing the pedestrian bridge over Norfolk Street.

Every effort will be taken to ensure the construction of this project minimizes impacts on local residents, businesses and downtown parking.
Sections of Wilson Street and Northumberland Street will be closed to vehicular traffic during construction. Pedestrian and cyclist access along Wilson Street will remain open throughout most of the project.

There will also be a lane reduction on Norfolk Street between Gordon Street and Macdonell Street and traffic will change as follows:

Access to the Norfolk Street footbridge will be closed. People walking will be able to access the ramp to the sidewalk on the west of Norfolk, and can then walk north to Macdonell, or south to Waterloo, to cross Norfolk safely with a traffic signal.
The recommended detour for people on bikes is via Fountain, Wyndham, and Macdonell Streets. This detour is signed. People on bikes can also travel in the northbound lane on Norfolk Street. Motorists are reminded to share the road.
Check back here for updates on construction impacts throughout the project.

Materials from the April 4, 2017 public meeting

Materials from the July 20, 2016 public meeting

The City of Guelph is looking for feedback from the public on a number of conceptual design alternatives being presented at this meeting. The main topics of focus include: