Designed by Greg Elliott, the sculpture sits over 6 feet tall and weighs around 647 lbs – the same amount of trash the group pulled out of the Speed and Eramosa rivers during its first clean up in 1979. The items, other than usual garbage, most often found during the cleanups include tires, scrap metal, hubcaps, shopping carts and paint cans. Using this as a guide, and pulling materials from local scrap yards to supplement, Elliott set to work, envisioning an installation that would appeal to children and youth and also act as a lasting reminder of the importance of environmental conservation.

With the artistic consultation and welding assistance from Jim Diebel, Elliott built the Garbasaurus, which resembles a prehistoric bird perched on the edge of the river in Royal City Park. The park is a traditional meeting spot for Speed River Cleanup volunteers, and the sculpture helps to recognize those who have gathered year after year to clean Guelph’s rivers.

The sculpture was unveiled on Saturday, June 5, 1999, by then-Mayor, Karen Farbridge.

2000: The Garbasaurus has been the subject of vandalism over the years. The City’s parks department enlisted the artists help in 2000 to reinforce the sculpture and repair pieces that had been damaged.

2018: After receiving a structural assessment by Tacoma Engineers it was found that the head and neck of the Garbasaurus were loose and needed to be re-welded in spots. Fabio from Rosmar Welding helped steady the beloved sculpture using repurposed metal supports to keep with the overall aesthetic of the piece. 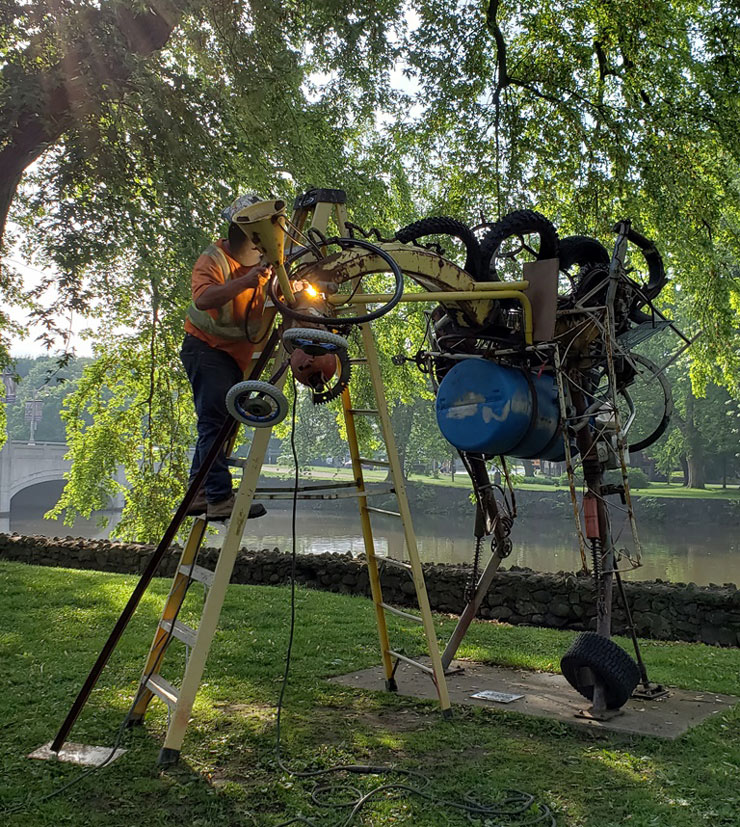 OPIRG is the Ontario Public Interest Research Group. A network of PIRGs currently exists across much of Canada and the U.S. The PIRGs were launched by “public interest” activist Ralph Nader in the early seventies as a means to harness the energy and talents of students to help solve pressing social and environmental problems. The OPIRG Guelph chapter was founded at the University of Guelph in 1976 following a visit that Nader made to Waterloo.

OPIRG Guelph works on a variety of environmental and social justice issues of public interest by conducting research, developing popular education materials, and engaging in activism.