The City received 84 submissions for Stage One of Phase Two of the Main Street Mural Project from applicants all over Canada. Five applicants have been shortlisted and invited to apply for Stage Two. For this stage of the competition artists will be asked to develop a project proposal, budget and concept design and/or rendering for consideration. Shortlisted artists and web links are included below according to site locations.

This is Phase Two of the funding implementation.

The following sites have been identified as locations for public art murals. The anticipated schedule for selection of an artist/artist collective and completion of the project is outlined below. The City reserves the right to modify these dates as required.

The successful artists for Phase One have been chosen!

The City received 202 submissions from applicants all over the world for the Main Street Mural Project. Twelve applicants were shortlisted and four finalists have been selected to enhance sites along Wilson Street in Downtown Guelph.

Site A: Market side wall awarded to Pellvetica Sandy and Steve Pell, a husband and wife duo from Kitchener, were awarded the commission for the side wall beside the Guelph Farmers’ Market. Their design is a detailed monarch butterfly – a nod to Guelph’s nickname, the Royal City, and a tribute to pollinators.

Why a monarch? While some endangered species have grabbed global attention, the decreasing population of the monarch butterfly has only recently gained attention. Today in Ontario, monarchs have reached the “special concern” status. “Special Concern” means the species lives in the wild, is not endangered or threatened, but may become threatened or endangered due to a combination of biological characteristics and identified threats. This speaks directly to the theme of Robert Cram and Eldon Garnet’s  public art installation at the corner of Wilson and Gordon Streets, that, “nature is precarious, and that without stewardship, it is in jeopardy.”

Pellvetica’s artwork is built on a balanced, and often symmetrical, grid foundation. Each of the shapes used are inspired by the natural repetition of patterns found in nature’s most beautiful cellular structures and textures.

The artwork itself is painted using sharp, black line work that is highlighted by bright white accents. A vivid orange copper metallic paint has been used throughout to further draw attention to the piece since the reflectivity of the paint will naturally bounce sunlight. This colour structure will also play off the polished bronze deer featured in the installation by Cram and Garnet.

A natural selfie site, visitors will be encouraged to pose in front of the butterfly wings and share their experience using the hashtag #royalcitywings.

Site B: Wooden inlet on side of City Hall awarded to Cheka Creative Inc. (Alex Kwong and Sergey Ryutin) Alex Kwong and Sergey Ryutin from Calgary were awarded the commission for the wooden inlet on the side of City Hall. The artwork created for this designated heritage site, entitled As it’s Written, provides a visual connection of the past and future. A monochromatic background consisting of Guelph’s founder, John Galt, and the historic Basilica on the hill give the viewer a glimpse of the past, while the young fawn represents both the future and the original peoples of this land, the Attawandaron, who called themselves, “The People of the Deer.” The fawn also provides a connection to Guelph’s latest public art installation, “Sudden Garden,” by Robert Cram and Eldon Garnet.

As the story goes, Galt founded Guelph on St. George’s Day, April 23, 1827 with the ceremonial felling of a large maple tree. This is represented by the array of maple leaves flowing the length of the mural. The fawn, also a symbol of growth and empowerment, is enveloped by the leaves, further emphasizing connection between the past and present.

In consideration of the heritage site on which the artwork has been installed, Cheka’s goal was to create a visually compelling piece that complements the building both in subject matter and colour scheme. Through the use of warm greys and beige tones, they’ve developed a design that is in harmony with the surrounding architecture.

The “map” overlay of Guelph’s main roads further activates the theme of connection in this piece.

Lavallee, a Métis artist from Winnipeg, was awarded the east underpass wall on the Guelph Farmers’ Market side. His design, entitled Cultivation, was inspired by his research of the history of Guelph, specifically the traditional territories of the Attawandaron whose land was described as a ‘community of longhouses surrounded by fields of corn.’ 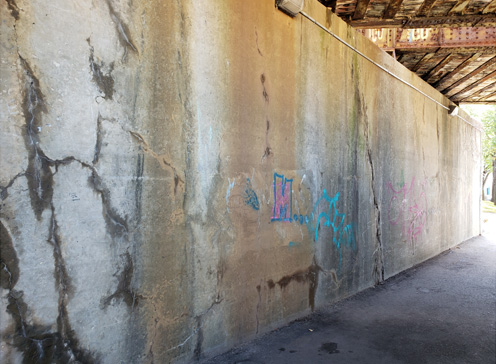 Starting from the left we see an abstracted cornfield in a sea of green, honouring a healthy and productive earth/land, which slowly ascends and grows tall toward the centre, closest to the sun. The vivid colours and the ascending and descending nature of the design is meant to stimulate the eye and the imagination, to almost animate itself with each pass by.

The right half of the mural represents cycles of time, seasons and days of the week, which continuously rotate like clockwork around the centre. The blue counters the green of the earth, representing and honouring water and the nearby rivers. The human hands, mirroring each other, emphasise the constant physical work and cooperation required for cultivating the land.

While simple in design, Lavallee wants the general message of the mural to describe that through hard work and effort, good results will happen – like the old adage says, “you reap what you sow.”

Jarus, a Toronto artist, was awarded the fourth site on the west underpass wall. Jarus’ design, entitled In Flight, features a variety of birds, creating movement across a vivid blue sky.

Bird watching brings people together in a spirit of enthusiasm and appreciation of nature. By featuring a variety of birds, Jarus’ artwork recognizes the diversity in Guelph and emphasizes the importance of inclusion. Jarus was inspired by Ted Fullerton’s bird sculptures in Market Square and Guelph Central Station and as well as Wilson Street’s role as a centre point of travel, energized by constant movement. He hopes to encourage the fundamental human aspiration to move freely and dream greatly through this installation.

All applications were reviewed and evaluated by the City’s Council-appointed Public Art Advisory Committee. City staff were involved as non-voting members.

This is Phase one of the funding implementation.